In this blog you can read more about the compatibility issue of an iPhone OLED touchscreen that can occur after a screen replacement. You can read how this problem arises, how you can recognize it and of course how you can solve it. Read along to find out.

How can you recognise the problem?

With all OLED screens for iPhones you can get a compatibility issue after screen replacement with an IOS13 update. This only happens on screens with the original touch panel. So all original and glass refurbished screens. You do not have this problem with the Compatible and touch/flex refurbs.
You will notice the issue immediately after connecting the new screen. After the repair, part of the touch no longer responds.

How can you fix the problem?

Unfortunately, there is currently no simple method to solve this. The problem is related to the device. There is a touch IC in each screen, it must be compatible with the version of the device that is being paired. So this means that one screen can work on one device but not on the other. The only fail proof method currently is to solder the touch IC on the original screen over to the new screen. 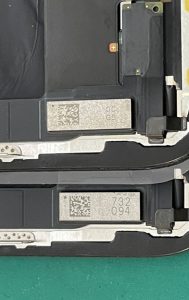 There are also people who claim that the compatibility can be influenced by reading the code on the touch IC cover. There are two types of original Apple touch panels. One variant has four digits and the other has six digits. The story goes that if the new screen has the same number of digits as the original screen, you can increase your compatibility.

Sourcing manager Wen wanted to test this. This was done with two iPhone XS devices. There was an iPhone XS with four digits and an iPhone XS with six digits. We have tested more than 2000 screens and unfortunately we saw little difference in the results. The percentage of screens that works on both devices was both around 70%. Regardless of whether it is a four or six digit screen.

So for now the only solution is to have several screens of the same model in stock. This way you can see which screen can be paired with the device that needs to be repaired.

Do you still have questions? Let us know in the comments!